I am happy to report that all three of the vegan options I brought to my work  party last night WERE SUCCESS!

I made Chipotle White Bean Dip from Plant Based on a Budget: 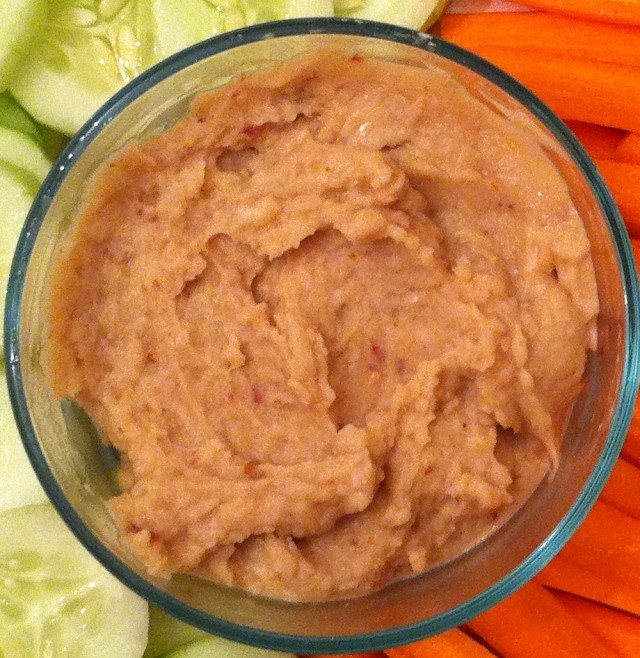 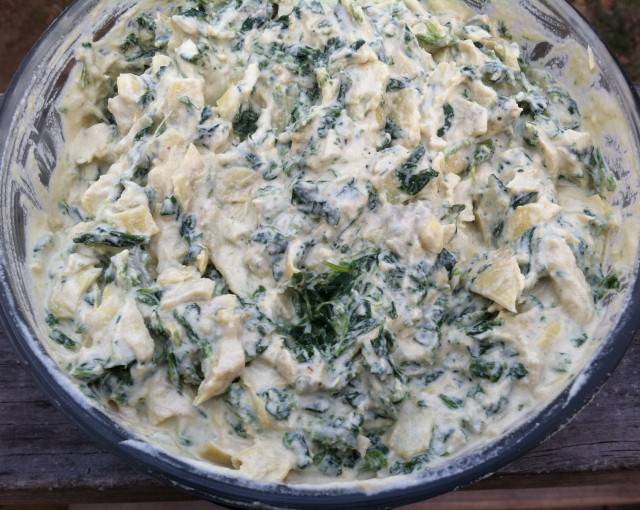 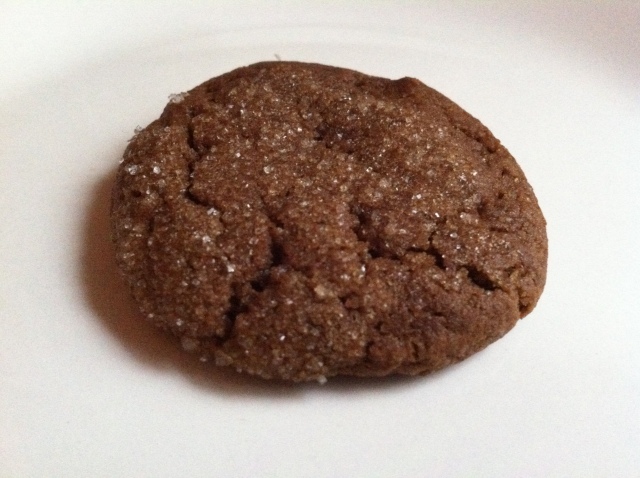 Yep, that is the lonely remaining cookie from the smorgasbord.  No one ever wants to be the person to take the last one!  So he’s mine, all mine.

As I said, all three of the selections were very well-received.  Lots of folks commented on the perfect texture of the cookies and asked for the recipe.

People also seemed to really like the spinach-artichoke dip, and I got quite a few questions about it.   This was probably largely due to the fact that I put a sign on the bowl cautioning that it was nut-based, because to the naked omnivore eye, it looks just like a “normal” dairy-based spinach-artichoke dip, and I was worried that someone with a tree nut allergy would assume the dip was safe and be in for a very unpleasant surprise.  My lawyerly wheels are always turning, I tell you.

Anyway, I will probably repeat all three for Thanksgiving next week since each of them scores a 4 out of 4 on my recipe evaluation test (cheap, easy, omnivore-approved, and make-ahead).  To make it extra-special, I’m planning to serve the spinach-artichoke dip in a bread bowl with the bread pieces available for dipping.  I actually kind of wish I were eating that right now…

What are some other fail-proof dishes for bringing to omnivore gatherings?

Have a wonderful weekend!  Last one before Thanksgiving!!!

Hello friends!  So even though I am still basking in the awesomeness of Virtual Vegan Potluck, I figured it was time to post again so I can share a little bit about the day that H and I had at the animal sanctuary.

But first of all…seriously, how awesome was VVP?!  I lost count of the number of new-to-me blogs I discovered and incredible recipes I bookmarked.  Huge props to Annie of An Unrefined Vegan for coming up with such a fantastic idea, and for being willing to put in the immense amount of work it takes to organize it.

Anyway, as I mentioned last week, the day after the Virtual Potluck, H and I went to a real-life potluck at Sunny Meadow Sanctuary in central Massachusetts.  Before the potluck though, we spent several hours working around the farm.

It was a grey fall day, a little chilly but not terribly cold, with a few spots of rain.  I was bundled up to begin with, but quickly shed layers as we began working hard!   First, we cleaned out the goat barn, removing all of the soiled bedding and hay, sweeping, and replacing it with fresh shavings.  This required several trips across the farm to empty our wheelbarrows on the manure pile. 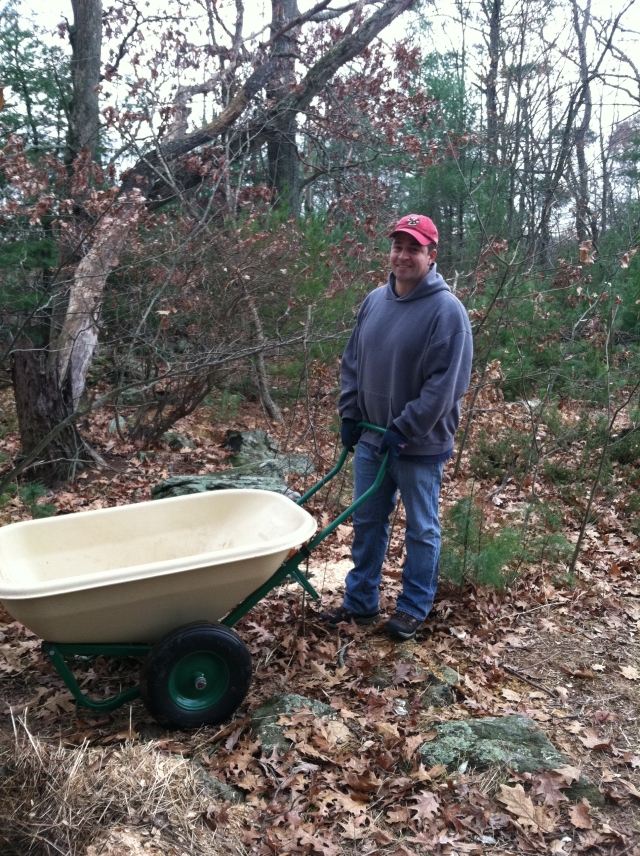 We also cleaned out the goats’ water buckets and gave them fresh hay and water.  Once the goat barn was clean, H and I took a short break to walk around and see some of the animals.  I felt so peaceful seeing them out in the pastures, just enjoying life, free from the horror, noise, and filth of a commercial “farm.” 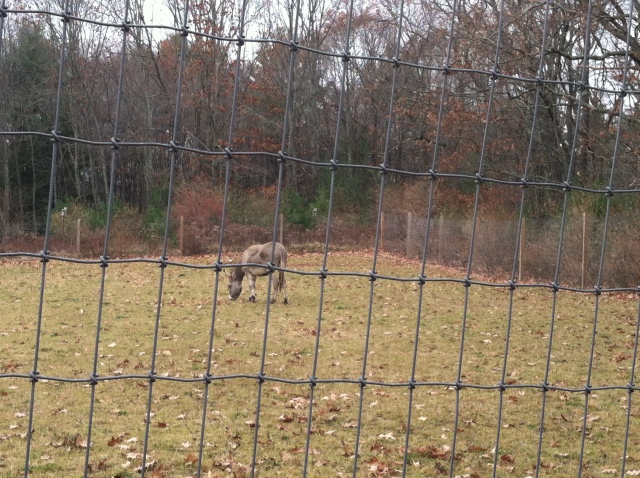 Afterwards, we visited the pigs and helped to clean up their pasture area.  And then, I got to play with goats!!! 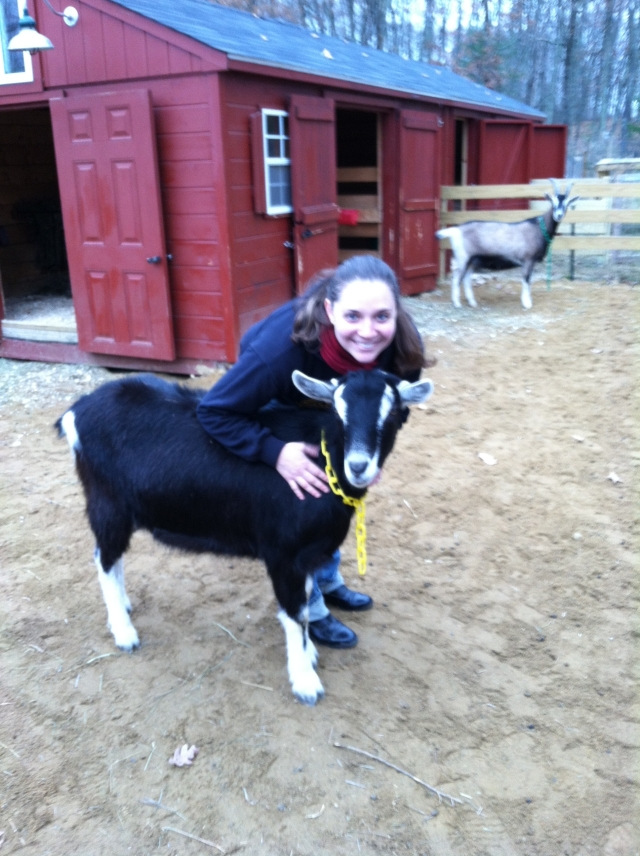 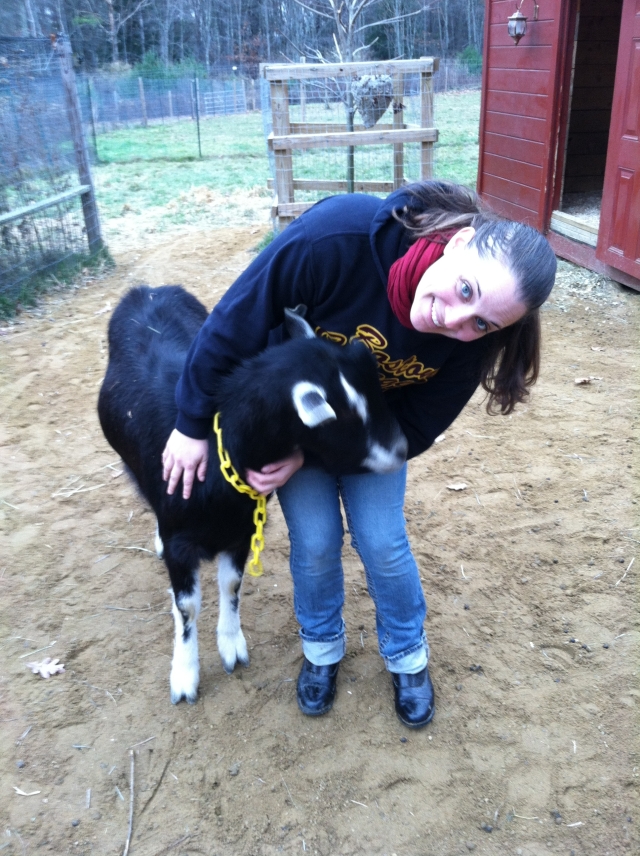 Anyone who knows me knows that I seriously love goats.  I have always thought they were such funny, mischievous, intelligent creatures, but now I think I love them even more!  The five young male goats at Sunny Meadow are some of the sweetest animals I’ve ever met.  The pictures show me hanging out with one named Alex, but all of them were equally affectionate, leaning right into you to let you scratch them behind the ears or tilting their heads up to nuzzle you.  Oh my God, I had so much fun hanging out with the goats on Sunday! 🙂

Anyway once darkness had fallen and the work was done, it was time to feast! 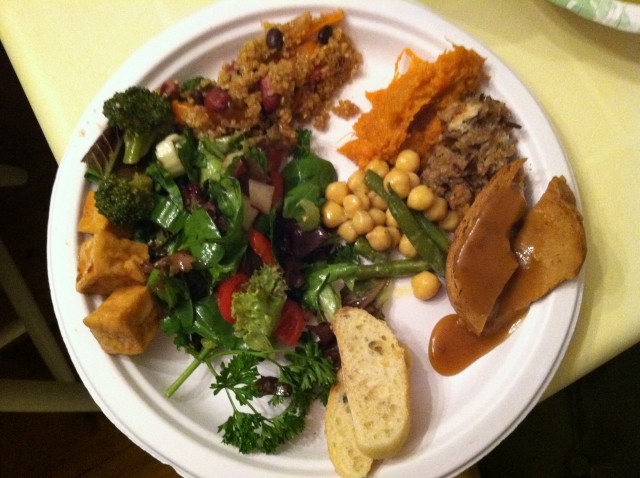 My plate included a big helping of a delicious salad made with lots of fresh parsley, marinated tofu cubes from Whole Foods cold bar, an absolutely incredible quinoa and bean salad, mashed spiced sweet potatoes (from a Veganomicon recipe, I’m told), a two-bean salad (chickpeas and green beans), Tofurkey roast with wild rice stuffing and gravy, and toasted baguette slices.  I had seconds and thirds of the mashed sweet potatoes…they were incredible!

There was also a really delicious split pea soup, plus the dish that I brought, which I somehow failed to photograph (derp).  I made Red Lentil Cauliflower Curry from Veganomicon, though I had to take some serious ingredients liberties.  I’m happy to report though that it was very well received 🙂

Overall it was just a really nice day, and a great chance to meet some big-hearted people trying to do some good for the animals.

So now I have officially kicked off the season of cooking stuff to share with other people.  It’s important to me that I share really high-quality, well-prepared vegan food when serving to an omnivore crowd.

This Thursday night is my work holiday party (super-early, I know!) and because I feel confident that there will be nothing vegan to eat, I am going to make at least two appetizers and at least one (but more likely two) dessert to bring along.

The first appetizer I’m going to make is this super-simple Chipotle White Bean Dip using as a base the recipe from the Plant Based on a Budget blog, which I like to tweak by adding additional spices and lime juice.  Click here to see the original recipe.

The other is going to be the Spinach Artichoke Dip with Garlic Cashew Cream that Glue and Glitter shared in the Virtual Vegan Potluck (click for recipe).  And for dessert, I have options, options, options!  The one that’s jumping out the most at the moment is Chloe Coscarelli’s Chewy Ginger-Molasses Cookies (click for recipe), but I’m also weighing some peanut butter and chocolate concoctions, because those always seem to go over well.

AND I have to make a decision ASAP about what to bring to Thanksgiving dinner next week, both for sharing with omnis and for my own dinner.  Same deal with Christmas dinner a few weeks later!

Finally, I just found out today that there is a Thanksgiving themed vegan potluck coming up this weekend, followed by a tour of another animal sanctuary, Maple Farm Sanctuary in Mendon, Massachusetts.  Not sure if I’m going to be able to get to that one but man does it sound fun.